London is a good place to go shopping, because it has a wide array of stores.

From Poundland to Gucci or Louis Vuitton. We’ll show you everything:

On Oxford Street you find the average stores you find in other capital cities:

but there are also special shops like world’s largest Primark or House of Frasers. 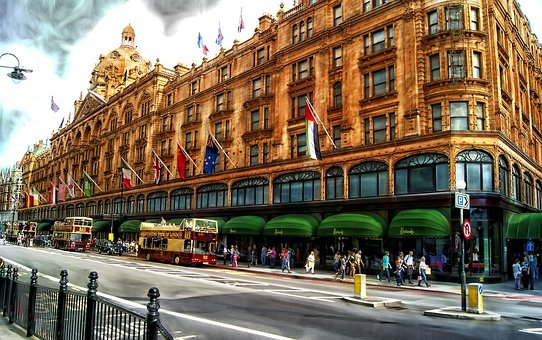 Harrods is located in the Brompton Road, 87-135

It was first opened in 1834. You can buy anything from expensive clocks to toys. It’s the most popular and exclusive mall in England. It’s the third most popular sight in London.

The Disney Store is located in Oxford Street. It’s a paradise for children, because it’s a disney themed store where you can of course buy Disney stuff. You can buy from any disney franchise, like Star Wars or disney princesses, so a store for both children and adults.

Hamley’s is located in Regent Street. It’s the oldest and biggest toy shop in the world. It was first opened 1760. It has 7 floors and themed rooms for every franchise you could buy from.